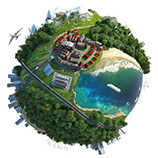 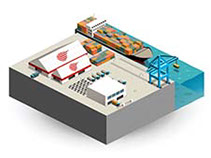 Soon after completion of his Bachelor of Arts Degree under University of Chittagong in the year 1981, he started his career in business as a Shipping Agents and Chartering Broker. He has a lot of the personality traits necessary to succeed in one venture on his own are well known; hard work, appetite for risk, integrity, competitiveness, growth-oriented Mindset, resourcefulness.

He completed his Bachelor of Commerce Degree under University of Chittagong in the year 1987.

After completion of his Bachelor of Commerce Degree, he started his Career as shipping Executive with MengHorng shipping which was operating FEEDER SERVICE between Chittagong – Singapore.

In 1989, he Joined a USA Based Consolidator namely DSL as Assistant Manager Operation. He worked there until End of December 1991. Later in 1992, he moved to French based company CLEMENT INTERNATIONAL, FRANCE as Assistant Manager, Operationwho's local agent was Mariners Bangladesh Ltd.

After that he joined Mariners Cargo Services Ltd; as Manager Operation in the year 1998.

He was promoted to the post of Deputy General Manager (Operation) in the year 2011.

Eventually he was promoted to the post of Director Operation for Allport Cargo Services(Ocean)Ltd in the year 2014.

Having the post-graduation degree from University of Chittagong, he started his career with SEALAND LOGISTICS LTD (a sister concern of Sea-Land Service Inc., USA) as Executive, Customer Support & Documentation in 1998. In April 2000, he moved to MAERSK LOGISTICS LTD as Executive, Supply Chain Management and promoted as Senior Executive in 2002.

He has 18 years of working experience in the Logistics and Supply Chain Industry, and skilled in Supply Chain Management, Sea/Airfreight & Warehouse Operation.

After completion Post-graduation in Marketing under University of Chittagong & in Management under National University, Bangladesh, Mohammed Sharfuddin began his career with QC Shipping Limited in March, 1999. The Group represented different MLOs like Sea-land, KMTC Line, UASC, IRISL & other NVOCCs. Sharfuddin started work with KMTC Line as an Executive (Customer service and documentation). Later he promoted as Marketing coordinator of UASC in March, 2002 and was responsible for overall sales department. Then he promoted as Line Manager of IRISL in September 2004. After that he left QC group and joined as Manager of Nippon Express under agency of Speedtech Cargo Limited in February, 2008. He got opportunity in APL Logistics in May, 2011 as Manager, Operation and worked there till February, 2013. He joined Allport Cargo Services (Ocean) Ltd as Manager, CFS operation in June, 2013 and promoted to Senior Manager, CFS Operation in January, 2017.  He obtained certificate after successful completion of training on Freight Forwarding & Multimodal Transport from Bangladesh Institute of Management.

During his span of career he obtained various challenging and responsible positions, utilizing the abilities that he has acquired himself along with co-workers.